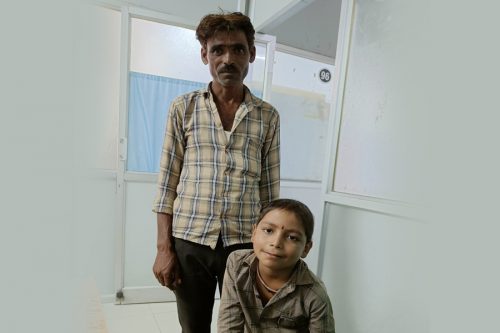 Kuldeep Banjara (name changed) started working as a manual labor since an early age. He had 2 sons. When his elder son was 8 years old, he fell into an open manhole and lost his life. Three years later his younger son Anand (and now, his only son) started having fever. He consulted a doctor in Jhalawar who referred them to Udaipur. The doctors diagnosed Anand with Acute Leukemia.

This was a huge shock for Kuldeep. He saw only darkness in their future. He did not know what to do to save his son. He had already taken loans from friends and acquaintances for his son’s treatment.

Anand was referred to Aurobindo Medical College, Indore for treatment. Kuldeep tried to make use of government financial aid schemes but did not have sufficient documents. Despite putting every effort and going through every local government office, he was unable to procure the documents. He had started losing all hope when he was informed about Leukemia Crusaders by his doctors. They helped him to fill out the forms and applied for financial support.

Leukemia Crusaders rushed in to help Kuldeep and Anand to get the necessary treatment. With this timely help, Anand is about to start his maintenance chemotherapy now.

Kuldeep says “I know there is still a long way to go, but I will forever be grateful to Leukemia Crusaders and the doctors and staff at Aurobindo Hospital who helped me in most difficult times. I feel positive that my son and I are going to win this battle eventually.”

An Initiative of
BansiVidya Memorial Trust